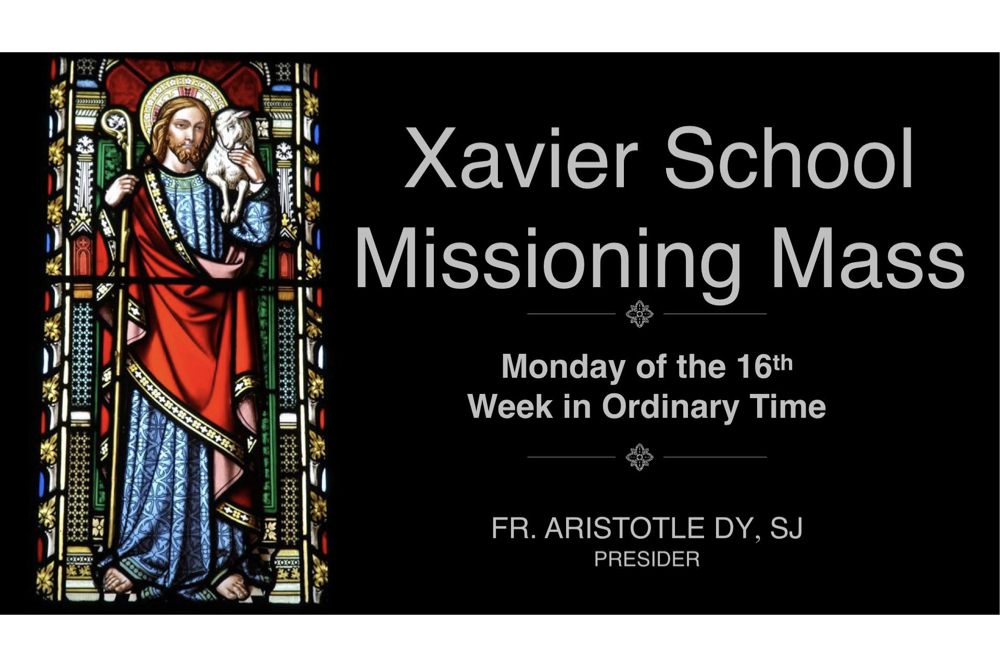 Finding God in all things during the pandemic

Missioning Mass for Faculty and Staff of Xavier School

You have been told, O man, what is good,
and what the LORD requires of you:
Only to do the right and to love goodness,
and to walk humbly with your God.  (Micah 6:6-8)

When the Ateneo de Manila University opened their Ignatian Festival a few weeks ago, they took as their theme, “One Foot Raised,” using a quotation from St Ignatius that says “The laborers in the Lord’s vineyard should have one foot on the ground, and the other raised to proceed on their journey.”

It is a very Ignatian image—a person on the move, to go where the need is greatest, where no paths may yet exist, to break new ground.  It is a spirit that Saint Ignatius and his first companions, including Francis Xavier, lived out as they put themselves at the disposal of the Church. They wanted to go to the Holy Land, but it was to Rome that they were called. They wanted to be missionaries, not bound to administering schools, but ever since they accepted their first school in Messina, education has been an enduring mission for the Jesuits; we locate ourselves as Xavier School in that long tradition. Francis Xavier himself did not see himself as a missionary, but at a moment’s notice, he obeyed the order to go to the Far East and evangelize our part of the world.

This spirit of going to the frontiers has animated the Ignatian family for close to five centuries. Twenty five years ago, I was captivated by a novel entitled The Sparrow by Mary Doria Russell. I remember searching for all available copies at NBS, to share with Jesuit libraries. It was about a mission to outer space, to another planet, and the protagonists were Jesuit priests. I won’t spoil it for those who haven’t read it, but I was particularly impressed by an interview the author gave. She was not a Christian, so she was asked why she made her protagonists Jesuits.  She said that she studied church history, and found that ever since the Jesuits appeared on the scene with Saint Ignatius leading the way, there has been no human field of endeavor that Jesuits have not touched. From education to various fields of science and the arts, to traditional missions, there have been Jesuits working in the frontiers of knowledge and Church mission. So she thought that if any group would be interested to evangelize  another planet, it would be the Jesuits.

I share this not to boast about how great the Jesuits are, but to connect all of us to that spirit of adventure, that spirit of inquiry, that desire to reach the frontiers to find God there, yes, even in the midst of a pandemic, and to tell the story of Jesus.  I recall this because I think that is where we are right now. We are no strangers to the internet, but up until a few months ago, none of us would have imagined doing Xavier education entirely online. And yet that is where we find ourselves.

We have been preparing for close to three months. We have learned so many new things, not only about technology, but about ourselves, what we are capable of, things we didn’t know we had it in us to do. That is true of the school as an institution too. Overnight, we devised a system for online enrollment, and even found a way to deliver books to the students while also giving employment to our agency personnel. There has been so muc innovation that we can be truly proud of, and I congratulate each one for your part in it!

We have discovered not only new skills, but our own struggles as well—the effects of being at home all the time,  the impact of so much screen time, the strange feeling of relating with people only virtually. Perhaps our own woundedness has come to the fore, and old issues have been heightened.

Once we start with XSEL on Wednesday, we will discover more things. We will see if our videos can be viewed as we intended them. We will see if our connectivity will be adequate. We hope for the best, but we must also be prepared for the best laid plans of mice and men to go awry.  Our skills, and our mental and spiritual resources, will be constantly challenged.

And that’s all ok. We will be patient, and we will learn to do it better the next time. So will our students. So will the parents. We are making a path where there was none, breaking new ground. The Lord sends us to this new mission, and it is a journey more than anything else.  Like the first Jesuits, we dare to go forward knowing that God is with us, that the only sign we will ever need has been given to us, because we are not alone.

We are at the frontiers of Jesuit education. We will walk humbly with God each day, doing right and loving goodness, being the light and nursing the light in others. Amen.

I CAN SEE THE STARS, DAD!