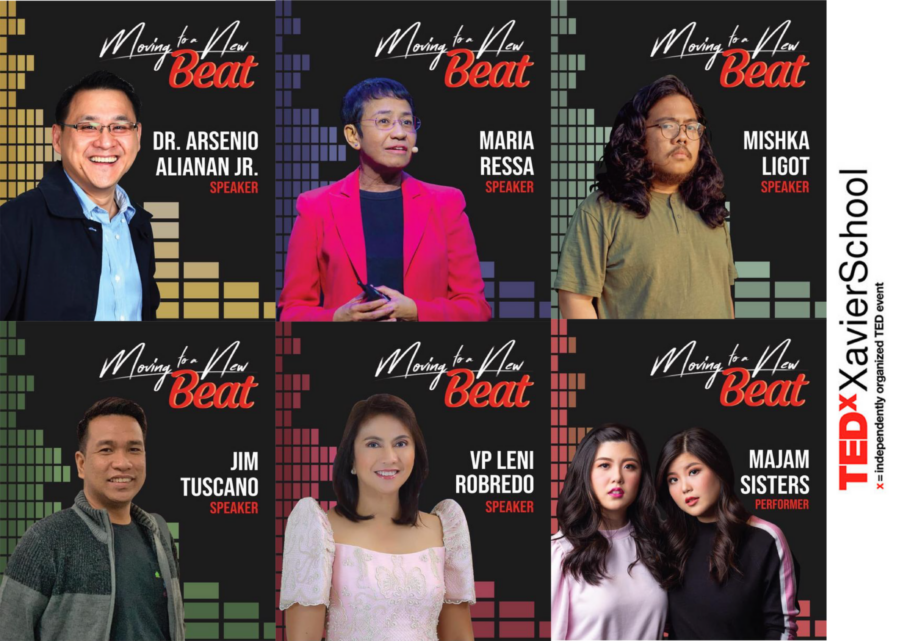 The distinguished speakers at this year's TEDxXavierSchool Main Event

On February 6, 2021, the TEDxXavierSchool Committee held their annual main event. This year’s program was entitled “Moving to a New Beat,” which was hosted by JHS English teachers Mr. Brian Moreno and Ms. Rocelle Dela Paz. It also featured an impressive roster of speakers.

According to the TED website, TEDx are independently-organized events with the goal of disseminating ideas worth spreading by bringing together passionate individuals from different fields. In this particular program, dealing with the effects of the pandemic, and discussing socially relevant ideas were given special focus.

In an interview with TEDxXavierSchool Committee Overall Head Darren Say, Darren said that the theme of “Moving to a New Beat” allows us to tackle hardships “with a fresh and optimistic perspective.” The event aimed to provide a new outlook that could “offer someone a glimmer of hope,” especially given the times in which we currently live.

To kick off the event, Mr. Mishka Ligot recited a few of his favorite works, and said that his reason for writing poetry is not to escape reality, but to live it. He mentioned that poetry helps him make sense of the complexity of life through “wrestling with mysteries.”

Following Mr. Ligot was psychology professor and clinical psychologist Dr. Arsenio Alianan. Dr. Alianan discussed how there are certain measures that individuals can take to deal with the overwhelming effects of the pandemic, such as being aware of oneself and practicing meditation, self-compassion, and hope.

Mr. Francis Jim Tuscano then presented his thoughts on the current Online Distance Learning modality being used nationally and internationally. He also offered a few pointers for students, parents, and teachers to follow for a more seamless execution of ODL.

Later on, celebrated journalist and human rights advocate Ms. Maria Ressa presented compelling arguments as to how social media has become a “behavior-changing” platform that has created pronounced divides within the Filipino community. She also explained that this divide can be attributed to the recent happenings in the “battle for facts.”

Later in the event, Vice President Leni Robredo gave a short message about facing adversities. She ended her speech by mentioning how she has faith and hope for the future generations of the Philippines.

The Majam Sisters, a sister singing duo, then serenaded the audience with their rendition of Justin Bieber’s “Anyone” and their own song “Hey Little One.” To formally close “Moving to a New Beat,” Darren Say then delivered a few words of gratitude and appreciation.

In this year’s TEDx Main Event, speakers and experts from diverse fields voiced out their views to help the Xavier School community “move to a new beat.” As Xaverians, let us continue bringing forth ideas worth spreading as we end this school year and look to the next. Luceat Lux!

This article was originally published on the website of Stallion, the official Xavier High School student publication. For more news coverage on Xavier High School events as well as feature articles, literature, and art, visit stallionpub.wordpress.com.