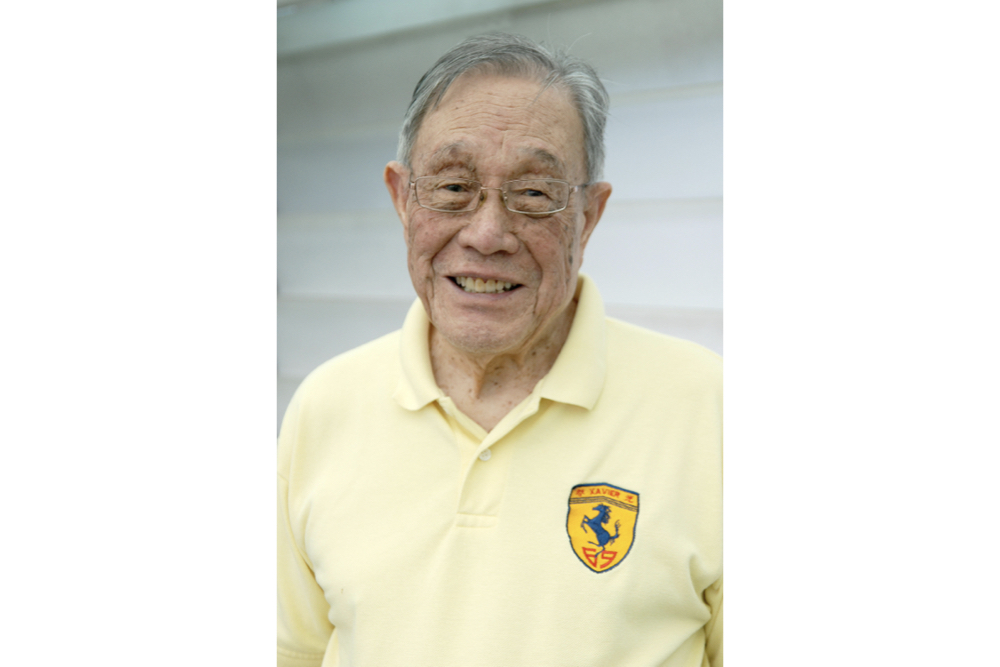 How do you measure a life? That popular song from the musical Rent observes that there are 525,600 minutes in a year, and asks how a year in a life must be measured. Well, if we think about the 101 years that Fr Joe Ly lived, you can do the math and honor him by figuring out how many minutes he lived on this earth. He was a lifelong math teacher after all.

The song proposes that time must be measured in love, and of love there was plenty in the life of Fr Ly. First there was the love for his family and the land of his birth. The other night Fr Art recalled the observation that Fr Ly is that rare creature who received all seven sacraments, having been briefly married when he was just all of 16 years old and had just completed junior high school. His grandfather wanted grandchildren sooner rather than later. Of his two paternal uncles, one was married but childless, while another was in the seminary. Fr Ly was the only boy in a brood of five. As the only grandson, a marriage was arranged for him, but he still proceeded to senior high school. When his wife died of tuberculosis, the bishop invited the young Joseph Ly to teach math at the minor seminary, and it was there that his vocation as a teacher was born. By that time, the childless uncle already had a son to carry on the Ly family name, and the uncle in seminary had died during the civil war. Joseph Ly considered a vocation to the Jesuits and entered the novitiate in Xianxian, Hebei, where the French Jesuits were active, in 1944, aged 23.

Throughout his first four years in Jesuit formation, the civil war in China raged and the Jesuits were all leaving China, bringing the seminary they ran along with them. Joseph Ly was too ill with tuberculosis to travel with them and had to remain behind, making his way to Manila in 1949. Like all the others, he left China not knowing if he would ever return and see his family again. Thankfully, when China opened up decades later, Fr Ly would be able to return for annual visits to his family. He doted on his nephews and nieces, even helping some of them to study abroad. He raised money in Manila to help with the construction of churches and support the needs of Christian families.

Second, there is Fr Ly’s love of teaching. Up until his final days, he would talk about his desire to return to the classroom. He often said that his Jesuit vocation was always about being an educator. After finishing philosophy studies at Chabanel Hall, he was sent to Zamboanga to teach math at the Chong Hua High School there. Theology studies followed at Mirador in Baguio, where he was ordained in 1956.

By 1957, or 65 years ago, he was assigned to Xavier, serving as Principal, math teacher, Chinese teacher, department head, and chaplain on and off. He had other assignments, like a 7-year period as Principal of Holy Rosary School in Lucena, and several years as translator at Radio Veritas Asia, but Xavier was always his home. The alumni from the 60s and 70s often trade stories about his unique classroom management style that might earn him some lawsuits if he tried some of his methods today. Stories about Fr Ly are told and retold whenever our senior alumni gather, and his presence at their reunions will be greatly missed.

Third is Fr Joseph Ly’s love for his Jesuit vocation. He clocked in 78 years of religious life, and often talked about his first contact with Jesuits as a senior high school student in Tianjin, when Fr Pierre Tritz became very close to his family. For the love of his vocation, he braved the journey to Qingdao during the civil war. He crossed the border on foot to an area controlled by the Republicans, so he could take a boat to Macau and then proceed to Manila to join the rest of the refugees from China.

He lived a very spartan life with other scholastics in Novaliches, Mandaluyong, and Baguio, but he endured it all and gave himself to the missions entrusted to him. Throughout his life, he engaged in sports—tennis, pelota, swimming, table tennis. We can all take a lesson from him in getting adequate exercise. Specially for Jesuits, it is important to be strong physically and spiritually, for the sake of one’s mission. Joe Ly exemplified this balance in rhythm of life.

We’ve heard a lot of trivia about Fr Ly in the past days, but the most moving story I heard is about Fr Ly’s sense of mission in his old age.  The story comes from Jerry Feng, a young alumnus of Xavier School. Jerry was born in Beijing and came to Manila with his parents at a very young age. He studied first at OB Montessori, but transferred to Xavier in the third grade, in the year 2008. Jerry recalls the great difficulty and frustration he had with so many classes conducted in English. His family was not Catholic, but got to know Fr Ly. Already in his late 80s, believe it or not, Fr Ly became a kind of private tutor to Jerry, who remembers being a little kid going to the Jesuit Residence after dismissal, where Fr Ly would explain all his lessons to him in Chinese. This personal mentoring helped Jerry adapt better to the Philippine context and to Xavier education, and Fr Ly became a close family friend.

Age was not an obstacle for Fr Ly to continue being on mission. He had his daily spiritual practices, and in his last recorded message for the community the day before his 101st birthday, he asked for prayers so that with good health, he can continue praying for us. He understood so well the mission given to elderly Jesuits who are listed in the directory as having the assignment to pray for the Church and the Society.

Between Fr Johnny Go and myself, there have now been more than 20 years of Xavier being headed by a Jesuit who is also an alumnus of the school. It has been our sacred duty and privilege during this period to bid farewell to our founding fathers. During Johnny’s time, we buried Fr Desautels, Fr Papilla, Fr Mena, and Fr Zuloaga. Under my watch, we mourned Fr John Chi who died in Taiwan, Fr Ortiz in Spain, and here in Manila–Fr Tritz, Fr Barbero, and now Fr Ly. Fr Ly is the last of the titans, as the alumni have been saying in the last few days. All the Jesuits who built up Xavier in its first decades have now gone home to the Lord. It is the passing of an era, and the mission is passed on not only to the few younger Jesuits you see around, but to all of you who share in the Jesuit mission today.

Fr Ly died on November 13, feast of the youngest Jesuit saint, Stanislaus Kostka, a Polish Jesuit of the early Society who defied his family and many odds to enter the Jesuit novitiate in Germany. He walked 400 miles to be able to do that, and lived Jesuit life for only ten months, falling ill and dying at the age of 18.

In stark contrast, Fr Ly also defied the odds as a young man, but he served as a Jesuit for 78 years. What does it say in the Principle and Foundation? That we must not desire a short life or a long life, but only to glorify God in all circumstances. Or as we heard in the reading from St Paul to the Romans, whether we live or die, we are the Lord’s.

I see in the timing of Fr Ly’s death a reminder to all of us, that whether we live a short life like Stanislaus Kostka’s, or a long life like Fr Ly’s, what matters is that we spend the time given to us in seasons of love.

Thank you, Fr Joe Ly, for the love you shared with us.

Choose eXcellence: Open House for Prospective Parents and Students for Kinder and Grade 1