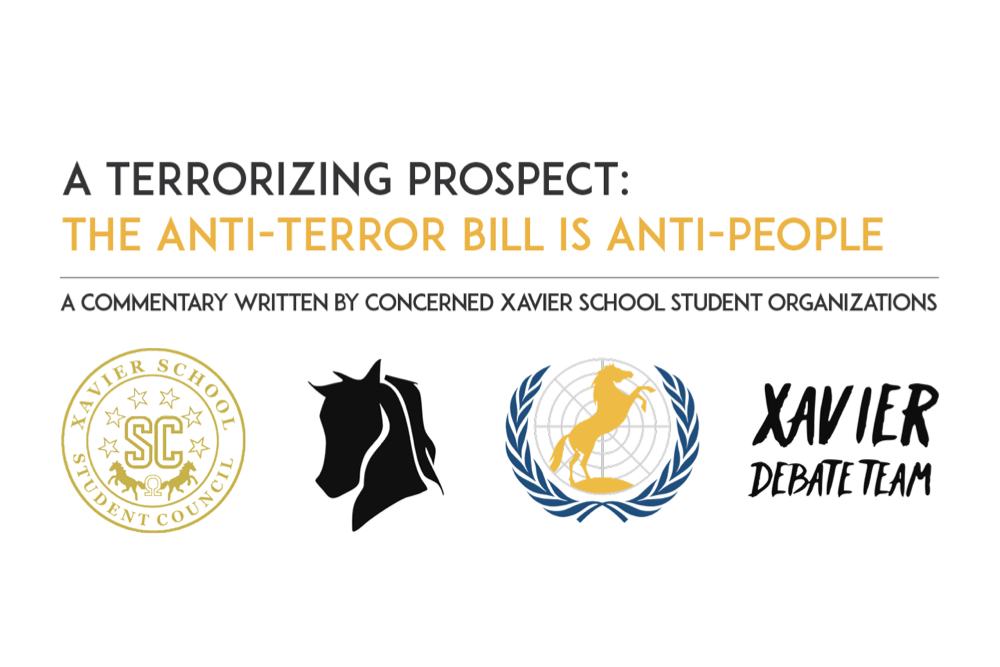 Against the backdrop of the unprecedented COVID-19 pandemic, the public’s interest has abruptly shifted towards House Bill 6875, more commonly known as the Anti-Terrorism Bill, which was approved on third reading by the House of Representatives on Wednesday, June 3. In his endorsement of the bill, President Rodrigo Duterte stated that it seeks to “contain the menace of terrorist acts for the preservation of national security and the promotion of general welfare.”

HB 6875 was copied verbatim off of Senate Bill 1083 with no amendments accommodated by the House leadership, causing opposition lawmakers to express grave concern about its railroading. As of Tuesday, June 9, the votes stand at 168 affirmatives, 36 negatives, and 29 abstentions. After some solons modified and withdrew their votes, Presidential Spokesperson Harry Roque confirmed that Malacañang has received HB 6875 for the President’s signature.

The bill’s passage is a controversial initiative deemed by many to be ill-timed and divisive in this public health crisis, yet the government has been suspiciously keen on pursuing it, even with existing counterterrorism legislation. While proponents argue that the perils of terrorism are no less imminent during these times, some pundits believe that dangerous terrorists may not be the main target of this measure after all. Instead, Congress, with its misplaced priorities, could very well be targeting our democracy and those who champion it.

At first glance, the intention of the bill seems justified with its goal of combatting the modern scourge of terrorism. The siege of the southern city of Marawi by ISIS-linked terrorist groups, a years-long encounter that cuts close to home, may have fueled calls for the review of the Human Security Act of 2007 (HSA) to heighten surveillance, harshen punishments, and the like.

However, the proposal’s “anti-terror” label is strikingly deceptive as it clamps down on a loosely-defined brand of terrorism, while muddling and even breaching constitutional protections instead of bolstering them. Mechanisms like the Anti-Terrorism Council, a proposed body comprising the President’s cabinet secretaries, possess immense power to implement provisions of the law as they see fit.

Furthermore, any person who engages in acts intended to cause death, injury, or interference with infrastructure can be labeled a terrorist and arrested for up to 24 days without a warrant from the courts. The exercise of civil liberties such as dissent and protest is deemed an act of terror if these intend “to cause death or serious physical harm” or pose “a serious risk to public safety.” Moreover, the creation of “speeches, proclamations, writings, emblems, banners or other representations” may be construed as an incitement to terrorism, which was not previously outlawed under the HSA.

While those that indeed seek to “cause death or serious bodily injury” must be subdued, the sweeping powers and vague conditions contained in the bill leave a variance of interpretation that may be exploited for malicious aims. Given the vicious political forces often at play in handling simple cases, past events suggest that abuse will occur even more frequently under this unchecked system.

The fundamental issue being disputed lies not with the perceived excessiveness, timeliness, or even legitimacy of a crackdown on terrorism, rather with the public’s confidence in the government’s ability (or inability) to execute the laws impartially. A considerable number of people are apprehensive about where the loyalties of elected officials lie, and rightfully so, as their fears are further validated with every blunder.

The War on Drugs, for instance, empowered law enforcers in the “neutralization of illegal drug personalities nationwide.” Yet such campaign spawned innumerable acts of violence by the police toward the vulnerable sectors of society, not to mention its failure to topple the industry’s “big fish.” Even if one were to assume that the killings are done in self-defense, the government’s persistent reluctance to accept investigation, let alone initiate it, casts serious doubt on their sincerity and competence. Therefore, Senate President Tito Sotto cannot claim that “terrorists or their supporters [should be] the only ones who will be afraid of the bill,” if the government has a track record of creating “terrorists” out of innocents, and brandishing their activities as “crimes.”

In light of the recent UN human rights report on the country, the Duterte administration stands to leave a legacy of state-led oppression, aggravated by yet another draconian measure. Besides the chilling effect on free speech and accountability, the Philippines is quickly losing its status as a bastion of democracy in Asia, mirroring the likes of authoritarian-ruled China and its brutal suppression of Hong Kong’s freedoms. Though similarities between these situations may look remote and uncanny at present, history suggests that the Filipino people must not wait until the dangers of tyranny become palpably real.

While one might argue that the mere publication of this piece debunks the opposition’s cries of stifled speech, it does not mean that the liberties enjoyed now will remain so, especially as threats to our freedoms emerge by the day. Activists are well within their right to assess our nation’s trajectory, voice their anxieties, and hold the government to account, as unchecked power breeds deceit and impunity.

Even then, discussing this issue may seem “too political” for some, fearing condemnation for one’s views. Others are privileged enough to have never suffered injustice first-hand. Nevertheless, the bill could be weaponized to repress any and all citizens, including the unassuming ones. We should continue to speak out and channel all resources at our disposal toward the cause, willing to unlearn our sense of entitlement and privilege in solidarity with our countrymen. The fear of persecution should not excuse inaction for the plight of others.

Adding on to a global health crisis and selective justice is a bill that revokes our license to act freely even when done honorably. There is all the more reason to be fearful and anxious. From the comforts of our homes, it appears there is little one can do to combat this injustice. However, for those who consider their efforts insignificant or futile, know that submission would play into the hands of the oppressors. The continued prevalence of corruption in our institutions does not prove the fruitlessness of dissent, but a shortage of it. And the fact that the government is actively eradicating dissent, perhaps more urgently than the pandemic, shows its potency.

We must keep in mind that the fight for integrity and democracy leaves no one behind, fueled by small individuals working to effect changes far beyond them. We ought to deliver a decisive blow to those who dare trample on our dignity.

A fitting start would be engaging with peers to learn different sides of an issue, however daunting it may be. While we may have our biases, communicate these respectfully, and criticize solely a person’s arguments. Only by practicing accountability and critical thinking can individuals have worthwhile discourse.

The responsible consumption of media is equally important, especially in this digital age. Though information sources are numerous, few can be considered reliable and accurate. It is our responsibility then to ensure the credibility of what we take in. Ignorance and passiveness should never be an option.

Lastly, use the Internet as an instrument of change: sign online petitions, donate to organizations, and express views through peaceful means. Social media is a powerful platform that fosters connection between peoples. With the multitudes of those in need, we would be better off using it constructively than for vengeful or purely recreational ends.

Regardless of age, everyone, especially the youth, has something to share. And with the nation’s future on the line, our silence would be a terrorizing prospect.