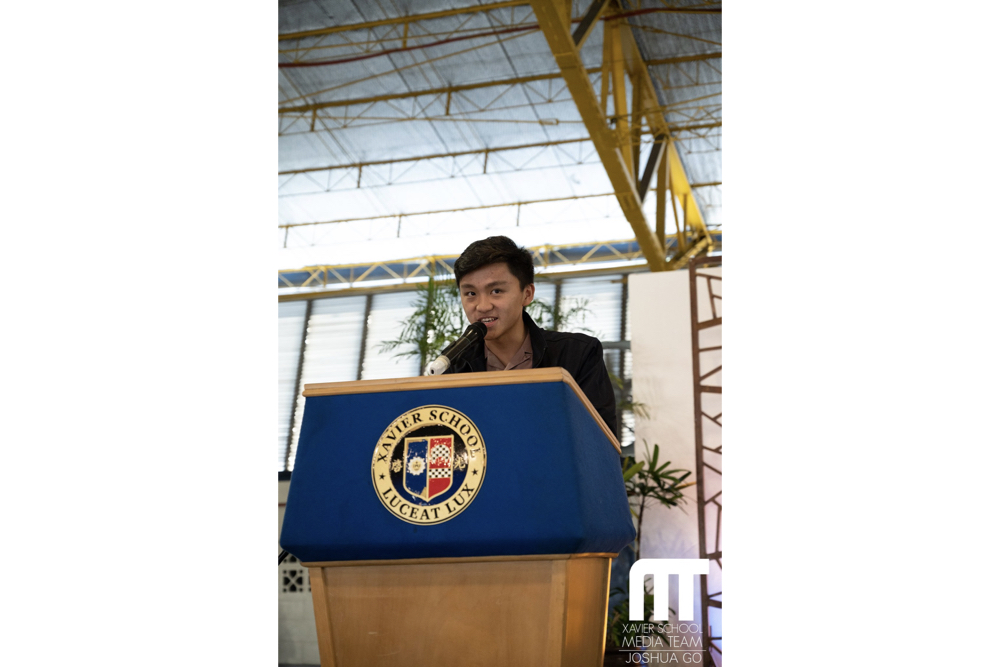 On February 24, 2020, the Xavier School  Gawad Uliran was held at the high school gym. Gawad Uliran recognizes high school students who have performed to an outstanding degree in their respective fields. These include athletic competitions, cultural events, academic contests, and other forms of school representation.

The guest speaker for the event was Keane Cedric Ting (XS ’19). To date, Keane has attained the following athletic achievements:

It is my honor to introduce to you our guest speaker for today. He is a Xavier alumnus from Batch 2019. He was the recipient of the Fr. Rafael Cortina Award Exemplary Athlete Award when he graduated.  During his High School years, he was also a Gawad Uliran Awardee.

He has a number of accolades under his belt.  These include  being recognized as three-time Most Outstanding Swimmer for Interschool Speedo All-Boys. In 2017, he bagged the gold medal in the National Open. He was also a 3-time Gold medalist in Batang Pinoy, and an eighth-time Gold medalist in the Palarong Pambansa. At present, he is studying at the University of the Philippines Diliman taking up a degree in Bachelor of Sports Science.

It is with great pride that I present to you this year’s guest speaker, Keane Cedric Ting.

Keane delivered his speech  to the student body:

It’s good to be back here today and be introduced in front of all of you.

How I wish what I heard in my introduction was Keane Ting, UAAP Season ‘82 Rookie of the Year, but that was only wishful thinking. When I graduated from Xavier School last year, I committed to persevere more in swimming as I entered college. Just recently, I was privileged to be part of the UAAP Season ‘82. During the third day of UAAP, I was leading by 1 point in bagging the Rookie of the Year Award.

During the last day, my opponent (whom I also considered as a friend) and I, were both left with one more event to determine the winner of the said award. My 1500m freestyle event was scheduled in the morning. I was aiming for the gold medal to attain the highest points possible so I can win the Rookie of the Year Award. During the race, when I passed by the 500-meter mark, one of the best swimmers whom I was supposed to beat, passed by me and started to disappear from my sight. By the time I reached the 1000 meter-mark, a swimmer from the outside lane whom I have never seen before, was swimming with all his might and no matter how hard I tried, I just couldn’t keep up. This put me in 4th place which means I only won the bronze medal with a total of 10 points.

On that same day, during the afternoon, it was my competitor’s turn to showcase his skills at the same event. If he will win anything less than a silver medal, I will still have the chance to be the Rookie of the Year. However, as I watched him swim, he was leading all the way. When I looked up the time board, my opponent won the silver medal beating the other swimmer by only 0.03 seconds. Definitely, I cried upon knowing that I lost to him. Even until today, thinking back about what could have happened on that day, still breaks my heart.

Clearly, there’s no redemption part in this story. So, what’s my point in sharing that

All these years, I have lived a life full of heartbreaks, almosts, and what-might-have-beens.

I always think that I was never good at anything even when I was in High School. Growing up as a Xaverian athlete and studying at the moment in the most prestigious university in the country, I am given countless opportunities to become a better version of myself; a stronger athlete, a clever student, and a better individual. This is why losing the Rookie of the Year Award was frustrating. I wanted people to see my achievements. I wanted to be recognized. Of course, we love being recognized. It inspires us and further motivates us to do and become better.

However, we have to understand that even if we did not win or receive an award or we are not recognized for the things we have accomplished, it will never be an excuse to give up. There should be no reason for us to stop trying to improve ourselves. So, stop making excuses.

This message is not for the athletes alone. This also applies to any student in general. You cannot use training as an excuse why you were not able to study for an exam or submit a paper on time. You cannot also use your academics as an excuse to not show up or participate in training. The excuses you make up will only hinder you from discovering and reaching your highest potential. In short, what you do not use, you will lose.

Being a student-athlete is indeed a challenge. However, like what they always say, “no pain, no gain.” You just have to believe in yourself. Stop making excuses and start making a difference. Stop complaining and start trying. Because if you don’t, you are missing 100% of the shot you fail to take.

While I am saying these things to you, I am slo being encouraged that despite my recent loss, I know I am still capable of getting my message across. Fail forward, never give up, and always look up!

Xavier School thanks Keane for his inspirational message and congratulates all the recipients of the Gawad Uliran medals and certificates.

Xavier School One of Two Schools in the Philippines to Join World Education Week, Oct. 5-9, 2020