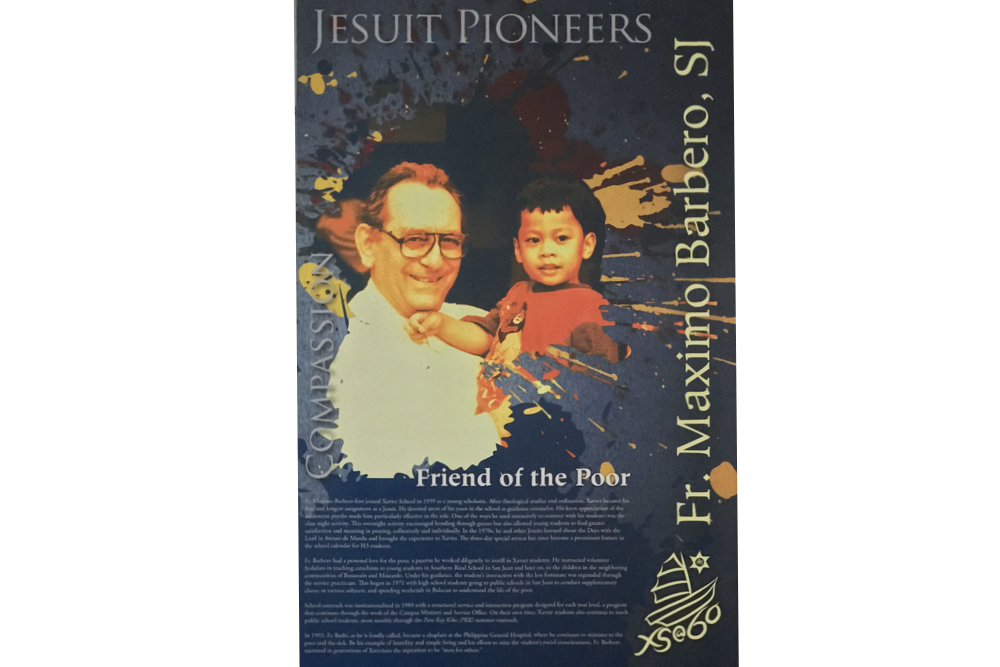 This homily was delivered by Fr. Aristotle Dy, SJ on August 7, 2019 during the Funeral Mass for Fr. Maximo Barbero, SJ at Mary the Queen Parish.

THE WORLD WILL MISS YOUR LIGHT

As a young boy growing up in Little Baguio, I would get my haircut from Mang Nonoy,   the neighborhood barber on Ibañez Street. Big barber shops in the area have come and gone, but Mang Nonoy is still there. One day many years ago, he was cutting my hair when a man on a motorcyle arrived. Seeing that Mang Nonoy was busy, the man said in Tagalog that he would come back later, and sped off. I asked Mang Nonoy who that was, a foreigner who spoke Tagalog. Mang Nonoy, said, “Ah, si Fr Barbero yun.” And I said, “Huh? Diba ikaw ang barbero?”

Like many others, the unique name struck me. I met Fr Barbero again some years later when I got to high school. I was a Sodalist by then and would be with him in Barasoain for weekly catechism lessons; or in Tondo visiting the Filipino Jesuit living among the poor there, Fr Pedro Verceles; or collecting and distributing donations during times of natural calamities.

As many have shared in the past days, Fr Barbi was the Xavier Jesuit who epitomized love for the poor. In a series of posters honoring the pioneer Jesuits of the school, we identified him as the icon for Compassion, because he walked the talk when it came to showing concern for the poor. He established the school’s service program when he headed the Christian Life Education department, designing an age-appropriate social awareness activity for every grade level. This is now a hallmark of Jesuit education at Xavier.

For Fr Barbi, living the Gospel meant loving the poor or anyone who was in need. These activities were never just projects for him. He knew people by name and was very approachable. He was probably the only foreign Jesuit at Xavier who could speak and celebrate Mass in Filipino, which he did in Barasoain and West Crame for many years. At PGH, all of us who referred cases to him knew that he would personally attend to people, often with daily visits. I have heard story after story about Fr Barbi’s personal care for those in need. Here at Mary the Queen, the charity clinic at the back of the church is named after Fr Barbero.

On the first night of the wake, Fr Peter Pojol shared the story of how Fr Barbi and two other Jesuits showed up at their family home in San Juan one June day decades ago, asking why he and his three brothers had not enrolled. The family had financial problems, so the Jesuits promptly provided scholarships for them. Who would have known then that one of those boys would become a Jesuit?

Fr Barbero was also a long-time guidance counselor. He is credited with starting the practice of class nights, when students would stay in school overnight for what we would today call bonding sessions. Fr Danny Huang recalled an activity where he and his classmates were told to lie down in the open air and gaze at the stars, which for him was his first experience of transcendence, a realization of how large the universe was, and how small a teenager’s world could be.

Fr Barbi is an icon for compassion, and an icon for Jesuit formation beyond academics. He was a football coach in his day, and was the prime mover behind the Days with the Lord retreat for Xavier boys. Having been ordained priest as the Second Vatican Council unfolded, he embraced the reforms in the Church and promoted innovative ways of facilitating encounter with God. Jesus became our Kuya, our friend. We could tell him, Basta Ikaw. The Days with the Lord have been going on at Xavier for more than fifty years, and shared along the way with ICA and Xavier Nuvali, all because volunteers through the decades shared in Fr Barbi’s vision of friendship with Christ.

Fr Barbero is an inspiration to all of us, an example of simple living and love of Christ that is never separate from love of the poor.

Permit me to reflect a bit on Fr Barbi’s Jesuit vocation, which I think will endear him even more to us. Among the Xavier Jesuits of his time, he was the youngest. At the age of 12, he left his hometown in Burgos to live and study at the Escuela Apostolica in Javier, Spain, birthplace of St Francis Xavier. (Some of us have visited this place, which is now a retreat house).  It was a high school designed to train future missionaries, and the strategy worked because when he graduated at the age of 18 in 1950, he entered the Jesuit novitiate and volunteered for the China mission even if the Chinese revolution had already taken place.

The Jesuit missionaries in China were already exiled in Manila and elsewhere. Still, Fr Barbero was sent to Taiwan for two years of language studies, and then to Manila in 1956 where he took his philosophy studies at makeshift facilities in Mandaluyong. He stayed there for three years. He spent one year teaching at Xavier School in 1959, just as the school moved here to San Juan. After that, he went to Mirador Jesuit Villa in Baguio, where the China Jesuits had set up their temporary theologate. Having completed theology studies, he returned to Taiwan for more studies in Chinese, and it was there that he was ordained priest in 1963.

He was 31 years old, and still looked to China as his destination. He never got there. Instead, he and his band of brothers worked among the Chinese in the Philippines, among people like us so that we too could know Jesus Christ. It was here that he taught all of us how to love Christ—through the school, the Days with the Lord, the Neo-Catechumenal Way, the many projects for the poor and marginalized.

The China dream had to be reimagined.

By a stroke of Providence, today August 7, is the anniversary of the Restoration of the Society of Jesus in 1814, 205 years ago. There was a period of about 40 years when the Jesuits were dissolved, not allowed to operate throughout the world due to the politics of the day in Europe. Both in China and the Philippines, where the Jesuits had served since the 1580s, the Jesuit enterprise folded up. Jesuits had to return to lay life, or join other Orders or their local dioceses. Some went underground or lived under the protection of monarchs like Empress Catherine of Russia. It was only in 1814, after four decades of suffering, that a new Pope restored the Society of Jesus and allowed us to serve again. It was a time to rebuild, and it took a few more decades before the Jesuits could return to China and the Philippines.

Fr Barbero lived through such times too. The dream for which he left family and country behind—and at that time it was a decision to leave and never to return—that dream was thwarted. But his passion for the Gospel did not diminish. He worked among us and showed us the beauty of a life lived in and for Christ.

It was 60 years ago in 1959 when Fr Barbi first set foot in Xavier School. The Communist Party had already been in power in China for ten years; this year, it will be 70 years. Fr Barbi never served in China, his original destination, but now it is the Xavier boys who all go to China as part of their Xavier formation. Only God knows the future of this effort to bear witness to Christ in the land of our forefathers.

These days, we Jesuits are talking about the universal apostolic preferences that will animate our future. I look at Fr Barbero and I see someone who has lived these dimensions so well—helping people discern a way to God through experiences like the Days with the Lord and the Neo Catechumenal way; walking with those excluded by society; journeying with the youth. You may be gone from our sight, Fr Barbi, but you will continue to inspire us.

At Xavier, we always talk about Luceat Lux, about letting our light shine. In the Viber group of my Xavier classmates, someone said in tribute to Fr Barbero, “The world will miss your light.”

The world will miss your light, Fr Barbi. We are confident that you live in God’s eternal light now. Please pray for us, and visit us! Visit us, especially when we start to forget the poor.  Rest now in the Kingdom promised to you from the foundation of the world, for Jesus said,

“Come, you who are blessed by my Father.

Inherit the kingdom prepared for you from the foundation of the world.

For I was hungry and you gave me food,

I was thirsty and you gave me drink,

a stranger and you welcomed me,

naked and you clothed me,

ill and you cared for me,

in prison and you visited me…

whatever you did for one of these least brothers of mine, you did

“I AM WHERE I SHOULD BE”: Xavier School sponsors English teacher for Jesuit school in Cambodia