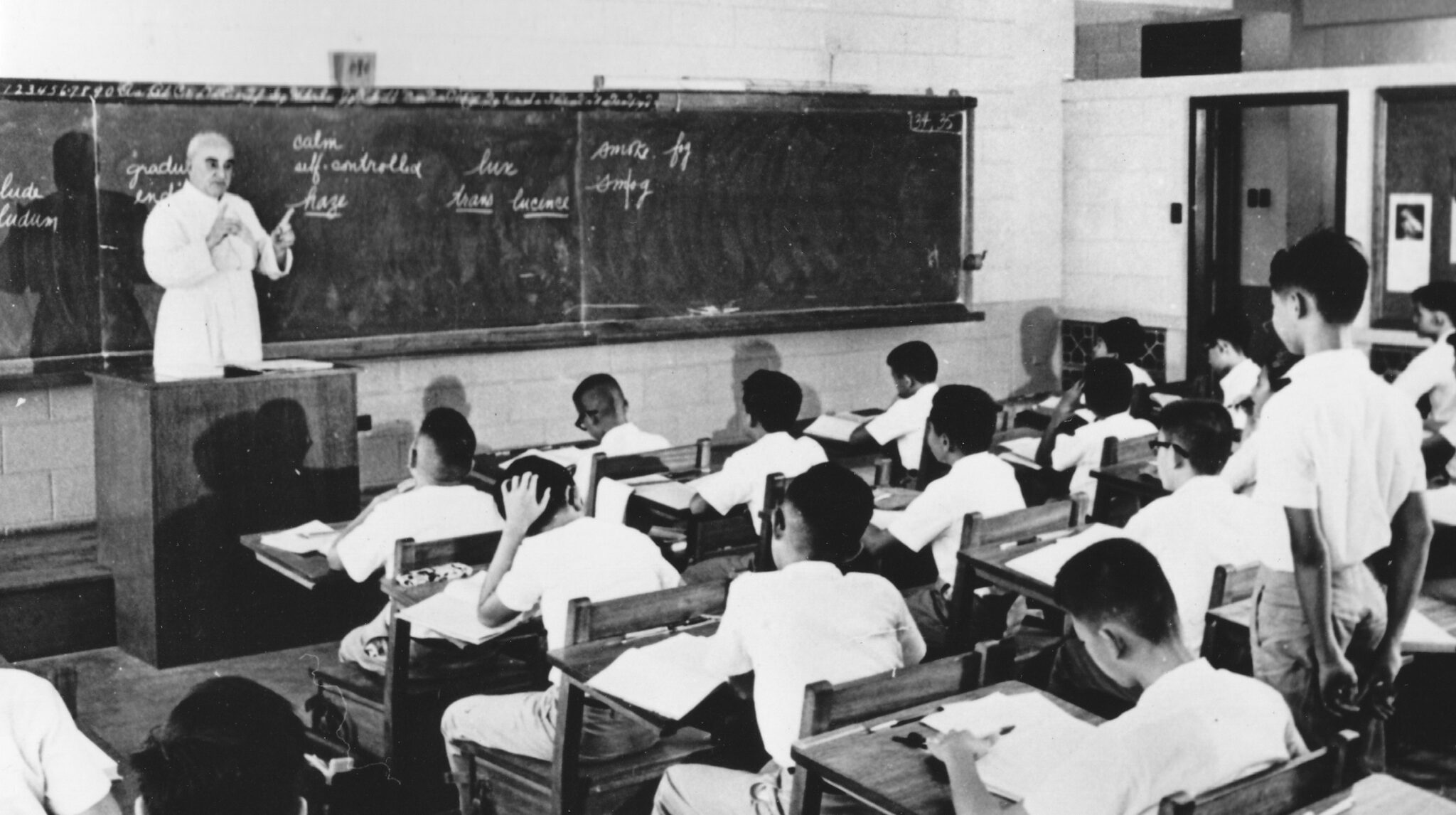 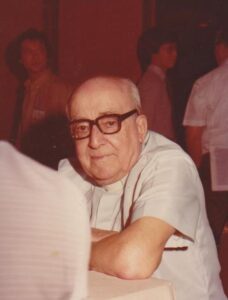 With his thick bushy eyebrows, alert eyes and quiet demeanor, the image of Fr. Pineau that stays with me is that of a grizzled, wise old owl. His given name Cornelius (meaning ‘horn’) is of Latin origin and in all likelihood, the railroad magnate Cornelius Vanderilt (b. May 27, 1794)–who some claim gave the name a kind of aristocratic air–was the person who was most famously associated with it.  On the other hand, Cornelius also happens to be the legal name of goofy comedian Chevy Chase.  If ever a film were to be made about Fr. Pineau’s life, there can only be one actor to play him and that would be none other than the venerable John Houseman (who need only reprise his role as that demanding, deliberate, meticulous, uncompromising but most-revered Harvard Law School professor, Charles W. Kingfield in the movie The Paper Chase).

Fr. Pineau was also the only man I personally knew to have been so-named. Upon revisiting the 1968 science fiction movie classic, “Planet of the Apes”, however, I was amused no end to be reminded that its leader had that name, too.  And through the years, the only other Cornelius I came across was the late Cornelius Bumpus, the talented touring musician for both the Doobie Brothers and Steely Dan bands (when members of the latter were all still in Bard College), who had as its original drummer .. ta-da .. Chevy Chase!  (Of course, they went by the name The Leather Canary, but its founder-collaborators were, indeed, Donald Fagen and the late Walter Becker.)

Like his compatriot and Xavier’s co-founder, Rev. Fr. Jean Desautels, S.J., Fr. Pineau was a French-Canadian Jesuit priest, who would forever be known for his mastery of the English language and for authoring two landmark books:  The Sentence and Open Sesame, the latter being his opus about Figures of Speech.  As he taught us in English class, coming across a figure of speech in a sentence was like biting into the nut in a chocolate bar, for it enhanced the experience and made things tastier.

Besides teaching us the (now) lost art of “How to Diagram a Sentence” (a prerequisite for anyone wishing to truly learn and understand the English language) where you dissected the sentence, breaking it down to its basics, he also taught us how to make a proper Outline. This was achieved by first using Roman numerals (for main headings), followed by capitalized letters (for subheadings), numbers (for components), small letters (for sub-components) … in descending order.  All these, of course, were always followed by a period, never a half-parenthesis, or God forbid, a combination of a period and a half-parenthesis).

Fr. Pineau chose his words with fastidious care and encouraged us to do the same; he also stressed proper pronunciation. Once, when someone in class observed that the room was very “spacious” (pronouncing“c” as “sh”), he wheeled around and wrote two words on the blackboard:  space and shoes.  Turning to the student, he asked, “Is this what you mean?”  Of course, the shoe was sometimes on the other foot, such as prior to dismissal one time, when we heard an announcement blare over the intercom (located above the blackboard in every room): “Attention all PMT cadets!  Please proceed to the football field after class and report to your corpse–spelled as pronounced here–commander.”  Normally, Fr. Pineau would have pounced with his razor-sharp wit and cut down to size someone who had murdered the English language like this, but he had to refrain from doing, this being  his fellow-faculty member.  Yet there was no denying that he struggled to suppress his laughter, for his eyes soon disappeared and he was even seen to be biting his lips to refrain from breaking out into laughter. 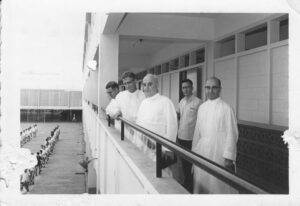 He was also a stickler for discipline, neatness and good penmanship. It was important for him that his students show up for school in complete uniform, school pin attached to our shirts (which as per school regulations for High School students, had to be always tucked in). Violators were not meted out corporal punishment, but Fr. Pineau, as usual, had a more cerebral kind in mind, requiring them to memorize a little-known poem entitled “The Song of the Shirt”.  I’m sure one of our classmates still remembers that poem up to this day, he being Fr. Pineau’s suki.  In fact, it became a kind of a ritual or game between the two of them, as this nonconformist rebel student obstinately refused to tuck in his shirt.  When the bell rang signaling the start of classes, all Fr. Pineau had to do was smilingly point to the perpetrator’s untucked shirt, and Hero would immediately stand to recite Thomas Hood’s poem written in 1843 (a paean honoring “Mrs. Biddell, a widow and seamstress living in wretched conditions”).

Fr. Pineau was not above practicing what he preached. Until he was well into his late 70s or early 80s, he had the discipline to go for his daily swim in Xavier’s pool, whatever the temperature reading. During his daily quizzes (taken on a miniature, horizontal blue-and-white form), he was the only teacher who allocated twenty-percent of your grade to good penmanship. Because some failed to satisfy this stringent and immutable requirement, they ultimately failed to make the Honors List. (I sometimes wonder if they’ve ever forgiven him for this.) But Fr. Pineau also gave everyone a chance to compensate for that by offering a “Booster Question” during his daily quizzes which, just like playing a video game, yielded extra credits to your score if you managed to get the correct answer. 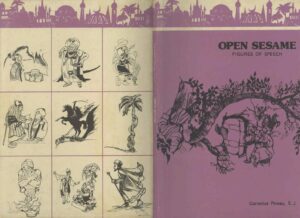 His book about Figures of Speech–aptly entitled “Open Sesame”–truly opened our eyes to another world that existed beyond what we knew then, a world made richer indeed by the appreciation of its many various forms; from the lowly pun (“Let us flee!” said the fly; and “Let us fly!” said the flea–which, incidentally, is also another figure of speech, a chiasmus.) to similes, metaphors, metonymy, litotes, meiosis and more than two dozen other kinds.  But his favorite was probably irony, of which there were three kinds: verbal irony, dramatic irony, and irony of situation.  And what better way to illustrate this than to delve into Edgar Allan Poe’s enjoyable short story (about, of all topics, revenge!), “The Cask of the Amontillado”.

In Poe’s delightful masterpiece, his protagonist Montressor is keen on exacting revenge against Fortunato, whom he feels has grievously wronged him in the past.  He conjures up a scheme by exploiting Fortunato’s weakness–his pride (for Fortunato fancies himself a connoisseur of wines).  Montressor would lure Fortunato to his underground wine cellar by offering him a rare Amontillado to solicit his verdict on it, but once there, bury him alive!

There is Verbal Irony (on the way down, Montressor feigns repeated concern over the coughing Fortunato’s health and well-being, but Fortunato answers, “Enough! I shall not die of a cough…”);  Irony of Situation (In the end, Fortunato is not so fortunate after all.), Dramatic Irony (Fortunato perishes by asphyxiation). In discussing that story, Fr. Pineau also advised us how not to answer a question.  For example, he told us about an answer to a question he posed (e.g. Identify “Amontillado”) in a daily quiz, and someone answered that it was the name of Fortunato’s servant!

In addition to English, Fr. Pineau taught us three simple, elementary yet essential lessons in life that would serve us well if we took them to heart.  Since he was, after all, our English teaching, the first was: “Say what you mean and mean what you say.”  Second: “If something is worth doing, it is worth doing well.” And third: “When you play, play hard; when you work, do not play at all.”  Thus, he ingrained in us that in life, we would do well to dot all our I’s and cross all our Ts, both literally and figuratively-speaking, of course. 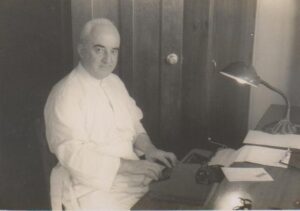 Unlike many Xaverians, I did not have any fear of Fr. Pineau, only immense respect. After all, ever since I was in short pants, he had been a regular dinner guest in the house. Hailing from Canada’s coastal province of Prince Edward Island, he pined for its wonderful seafood offerings. Thankfully, though, my mother helped him overcome this yearning by cooking his favorite crustacean dishes.  How he loved his crabs, prawns and lobsters; and what an unbelievably hearty appetite he always had, too!  In exchange, Fr. Pineau shared his extensive knowledge of roses with my mom, and there was a time when we had more than a couple of hundred of them in our garden. What a sight it was to behold when they were in full bloom!

When our family was about to welcome its first grandchild, a boy, I asked Fr. Pineau if the name being considered (Ryan) was a Christian name.  He smiled and replied by quoting Shakespeare’s Romeo and Juliet, saying “What’s in a name? A rose by any other name would smell as sweet.”  Admittedly, some people are very uptight about strictly following “Catholic” precepts and practices, even when naming babies. Thus, I was happy that even though he was already a septuagenarian then, he still maintained an open mind and did not let religious strictures bind us from practicing our faith. (But just to be sure, we chose Matthew as Ryan’s second name!)

I will always treasure having met Fr. Pineau, a wonderful teacher and a great man. But he often reminded me that he was, first and foremost, a priest.  In fact, I can still remember clearly his parting words to me many years ago: “Would that one of Xavier’s alumni became a priest, then my life would not have been in vain!”

Fr. Pineau, you have not lived in vain! On the contrary, we hope we prove ourselves to be worthy of the many sacrifices you made and for choosing to share your life with us. It was truly a great blessing to have known you and to have studied English at your feet. 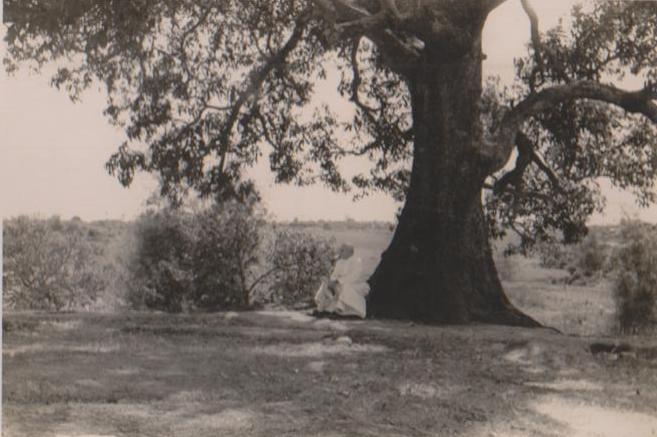 We thank Robin Tong (XS ’72) for sharing this first in a series of articles on his high school class’ mentors that will be published in a forthcoming book to mark the golden jubilee of XS ’72.